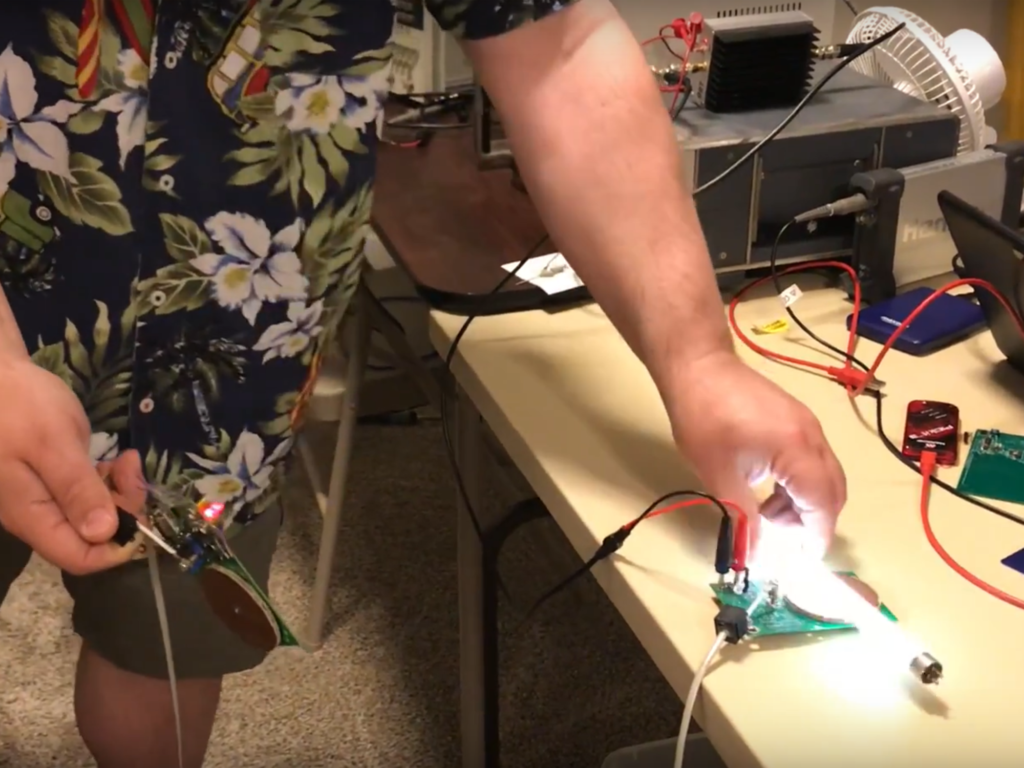 THIS IS THE LATEST PRESENTATION BY ADAM GRIFFIN ON THIS SUBJECT

Demonstrates how longitudinal wave generators are made, programmed and tested.

Another demonstration and explanation of the one-wire longitudinal transmission kit. 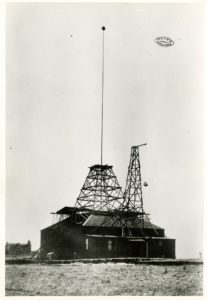 TESLA’S COLORADO SPRINGS MAGNIFYING TRANSMITTER – At the turn of the century, Nikola Tesla built a magnifying transmitter in Colorado Springs, which had electricity supplied to a primary coil, which was then stepped up through a secondary coil and this in return was put into a tertiary winding known as an “extra coil”. When electricity was fed to the initial primary coil at the frequency that all three coils were tuned to, it would resonate and cause what are known as LONGITUDINAL IMPULSES to be sent not through the air as much of the online misinformation states, but into a massive grounding network in the Earth.

If there is a receiver that is built in the same manner tuned to the same frequency, which is at a distance from the transmitter and it also connected to a grounding system in the Earth, it can pick up this electricity to run motors, light bulbs or any other electrical load – all by one wire, with no current return path thereby defeating the basic Ampere Law.

Transmitting information or power by way of longitudinal impulses are not supposed to be possible according to conventional science as the belief is that only transverse waves exist. Not only is conventional science incorrect in this belief, it has been proven to be indisputably wrong for over 120 years!

TRANSVERSE WAVES are electromagnetic in nature and travel from Point A to Point B while energy is being lost at 90 degrees to the direction that it is moving. Transverse waves conform to the Inverse Square Law meaning the energy is lost at the square of the distance. If you and I both held ends of a rope and I whipped one end up and down, we will see a wave move down the rope towards you and the amplitude (height) of the wave obviously gets weaker and weaker as it reaches the end.

LONGITUDINAL WAVES are electrostatic in nature and travel from Point A to Point B while there is no energy loss 90 degrees to the direction it is traveling. It also does not take time to get to the other side as velocity is not part of the equations to define Longitudinal Waves. This does not mean it is faster than light speed because that would imply a velocity. Rather, it is EXTRALUMINAL, which means it is outside of the light speed constraints, which were erroneously attached to electricity per the Einsteinian world-view, which is one of the greatest scientific hoaxes of all time.

To understand the difference between Longitudinal and Transverse waves, watch the following two videos for free. They are old and were recorded from VHS cassette tapes years ago but they are the best two presentations on the topic. The subject matter is presented by Eric Dollard who is considered by many experts to be the modern day Tesla.

REPLICATING TESLA’S LONGITUDINAL ELECTRICITY TRANSMISSION – Eric Dollard has replicated more of Tesla’s work the way Tesla did it than anyone else alive. At the 2019 Energy Science & Technology Conference, he proved this further by engineering a 20:1 scale model replication of the Colorado Springs Tesla Transformer and when it was built according to his engineering, it came out perfect and did exactly what was claimed.

If you want to understand the deep and accurate science of exactly what Tesla was doing, get a copy of his presentation here (GET THIS DOWNLOADABLE VIDEO PRESENTATION FOR FREE – INCLUDED WITH THE PURCHASE OF THE ONE-WIRE KIT – DOWNLOAD INSTRUCTIONS INCLUDED WITH THE KIT WHEN YOU RECEIVE IT): Theory Calculation & Operation of the Colorado Springs Tesla Transformer

For a taste of what the historical 20:1 perfect scale model replicate of Tesla’s Colorado Springs Magnifying Transmitter demonstrated, watch the video below (this is only a portion of the actual demonstration – the full demonstration is included in the presentation linked to directly above: 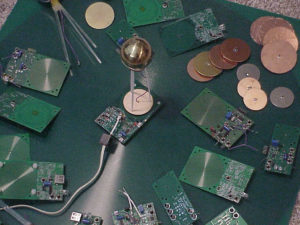 LONGITUDINAL WAVE, SIMPLE HOME STUDY KIT – Not everyone has thousands of dollars to spend on a 20:1 scale model replica of Tesla’s Colorado Springs Magnifying Transmitter. Nor does everyone have the technical background or the tools to create one.

Therefore, we are excited to be able to offer a desktop learning kit designed by Adam Griffin, an advanced engineer who has been helping Eric Dollard with various mathematical and engineering challenges related to all of this over the last couple years. Adam is more than qualified to provide the kind of quality design we wish to offer you through Vril.IO and you can see a bit of his work and developments with this Longitudinal Wave Kit in the videos at the top of the website. It can’t do many of the high power demonstrations as Eric Dollard’s 20:1 scale model, but it isn’t supposed to either. You can definitely light some LED’s with a single wire to impress your friends, Tesla enthusiasts and even yourself! The bottom line is that it is a Longitudinal Wave generator and it works. 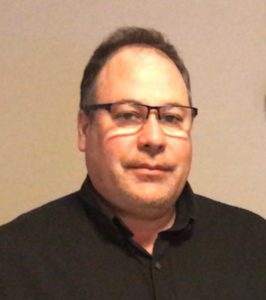 ABOUT ADAM GRIFFIN – Born in 1965 and attended many different schools as a child with parents constantly on the move serving in the US Army. In 1980, after the parent’s split and his mother came down with terminal cancer, Adam went about becoming an automotive mechanic by attending the Regional Occupational Program. At the age of 15, Adam received his California state SMOG inspection license and worked as a tune-up mechanic during high school. Several years later and while spending 6 years at University of California, San Diego, Adam started a family of 7 and began his professional career in 1984 as an electrical engineer, working on high-power transmission line development, Xenon lamp systems, and computer telephony. Following that, one job after another built Adam’s knowledge, starting with ASIC development for many types of medical products (hearing aids, pulse oximeters, blood glucose monitoring circuits, PCR and ELISA systems). Then after an extended period of designing power switches and microwave sources for use by the military, Adam returned to the medical industry in sustaining cardiac ablation generators and defibrillators. During this time, Adam discovered the work of another researcher in Europe, and, and having the opportunity to see him and review his works, he embarked upon a parallel learning path, developing easier methods to learn about Scalar Waves. This resulted in six iterations (small to large in physical size) of PCBs. subsequently emerging as a small microprocessor based “Scalar Wave Starter Kit”. Adam currently lives with his family in Spokane, Washington and works as a Systems Engineer.

There is a similar kit in Europe, but it is quite expensive and there are serious limitations that does not make it as robust of a learning tool as it should be. Fortunately, Adam’s design, while being a bit smaller, is much more flexible as it can be controlled by a laptop. The control program created by Adam allows a lot functionality that the other kit is lacking and at a much lower cost too! Adam’s design is much smarter and better all the way down to how the circuit board antennas are engineered.

Below are the support documents, which you are free to download – the are all in PDF format: 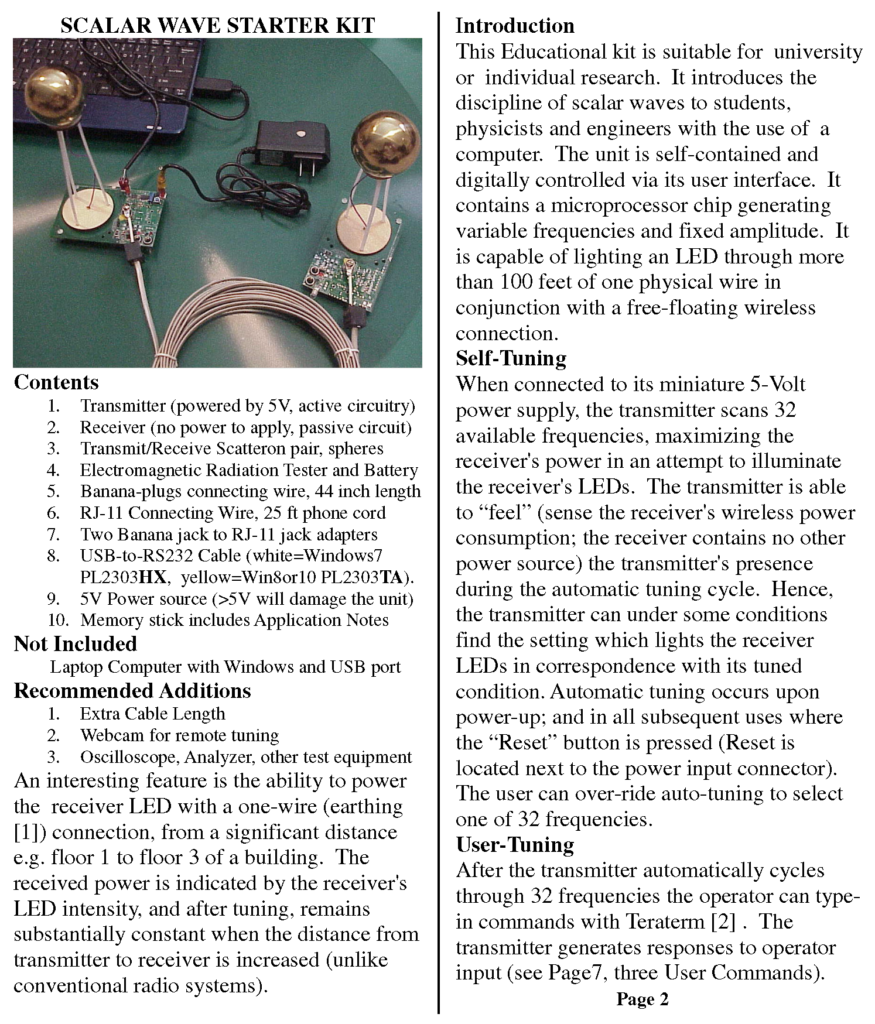 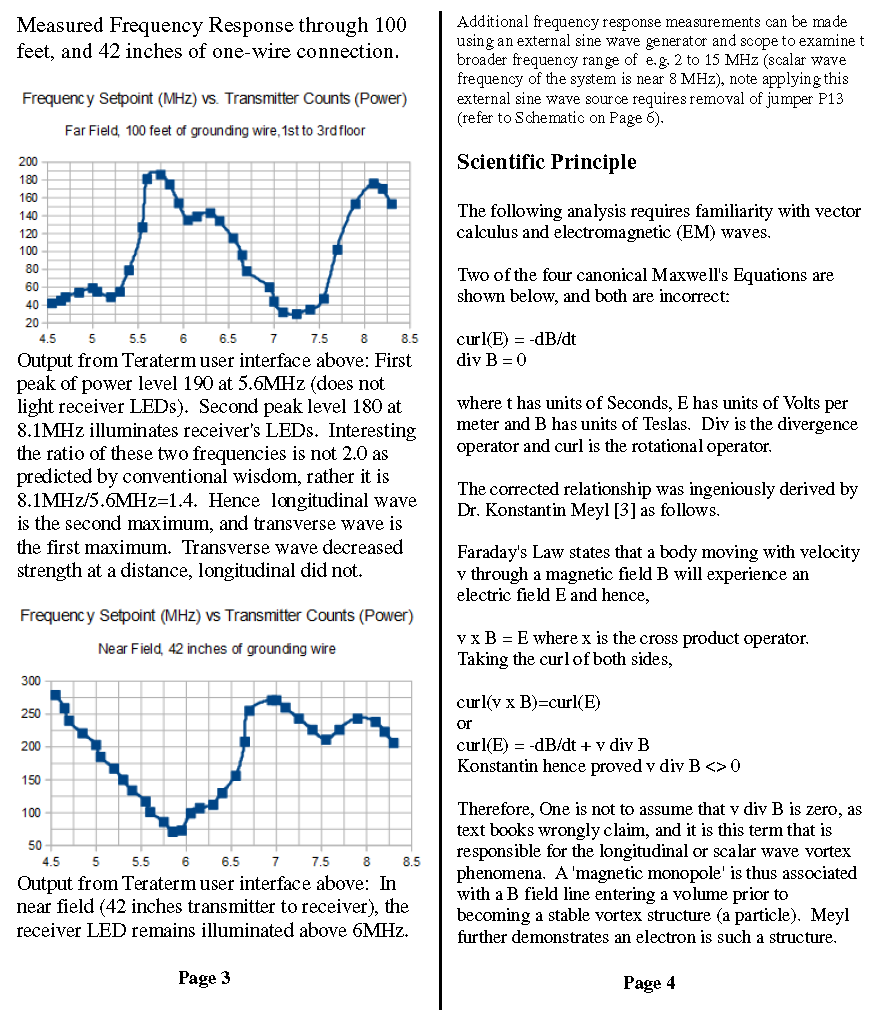 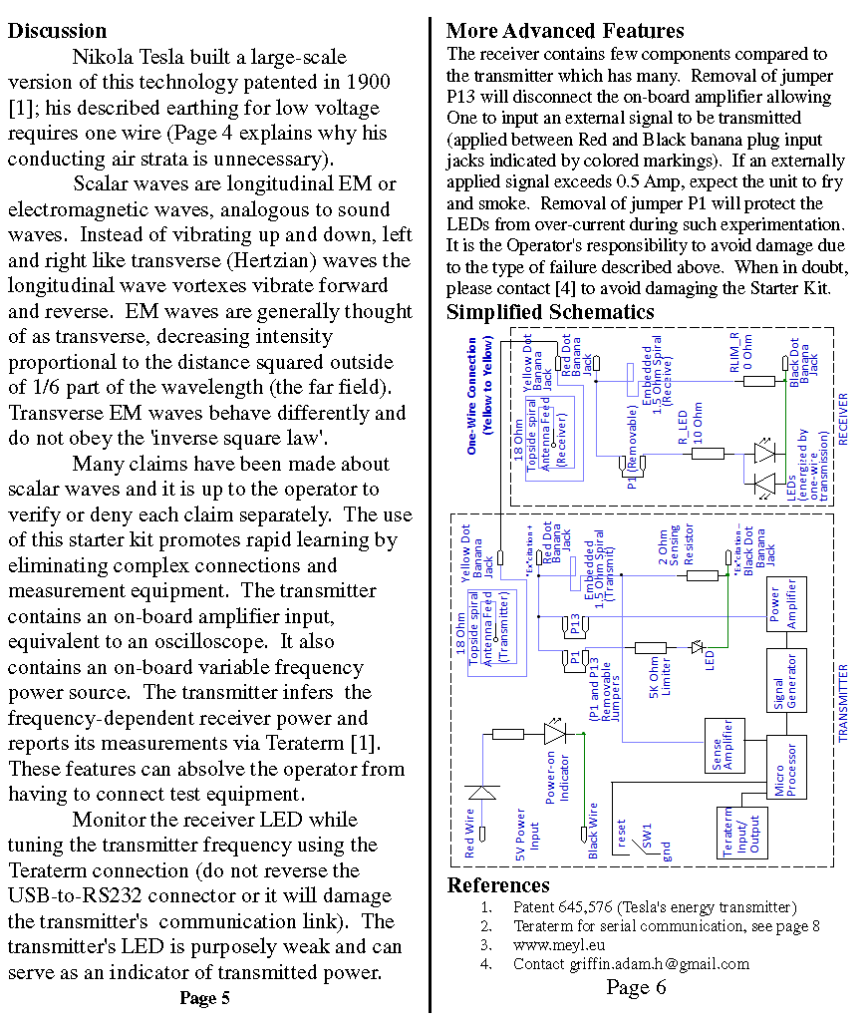 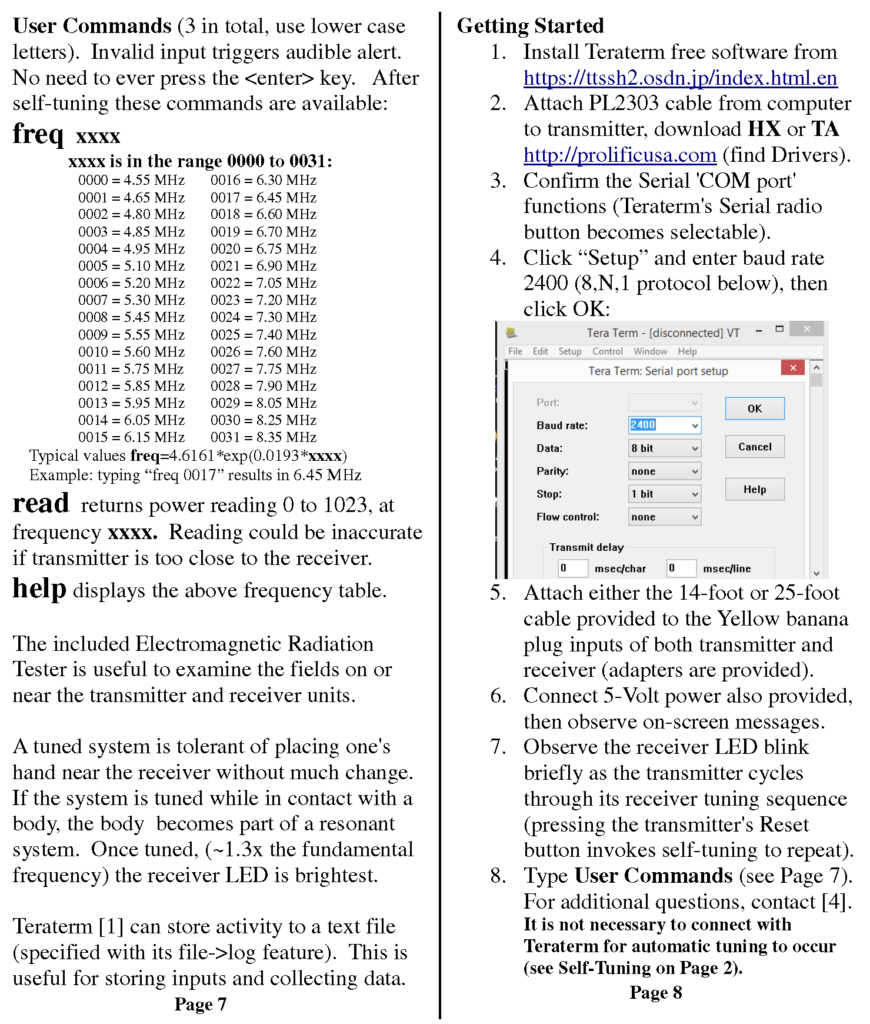 COMPARE TO THE EUROPEAN KIT 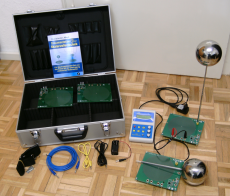 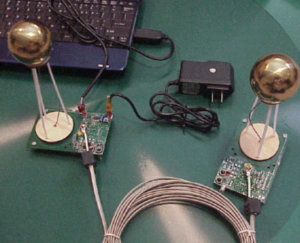 * ORDER NOW AND GET $100 OFF COUPON FOR A BEDINI RPX V2.0 SIDEBAND GENERATOR COMBO. WE HAVE INVENTORY, THESE WILL SHIP RIGHT AWAY.

All units are custom made to order so please understand and honor our no refund policy.
Keep in mind we have a 1 year guarantee/warranty – if anything goes wrong with anything in the kit,
send it back and we’ll repair or replace it without charge!

AT THIS TIME, WE ARE NOT ACCEPTING PAYMENTS BY PAYPAL, CREDIT CARDS OR OTHER ONLINE/DIGITAL PAYMENT METHODS.

PAYMENT BY MAIL IN THE USA (OR CANADA IN US DOLLARS)
We accept personal, business or cashier’s checks made payable to: A & P Electronic Media
Mail payment for the GRAND TOTAL listed below to: A & P Electronic Media, PO Box 10029, Spokane, Washington 99209 USA
Include a paper with your complete name, mailing address, email and phone number.
USA TOTAL $775 per kit + Shipping/Handling $15 mailed by USPS Priority Mail in the USA = $790 USD GRAND TOTAL.
CANADA TOTAL $775 per kit + Shipping/Handling $25 mailed by USPS to CANADA = $800 USD GRAND TOTAL.

FOR OVERSEAS PAYMENTS
Please email us at vril @ vril dot io for bank wire instructions – let us know it’s for the Tesla 1-Wire Kit
In your email, include your complete name, mailing address, email and phone number.
INTERNATIONAL TOTAL $775 per kit + Shipping/Handling $50 mailed by USPS to INTERNATIONAL = $825 USD GRAND TOTAL.

Email: Get In Touch Via Email